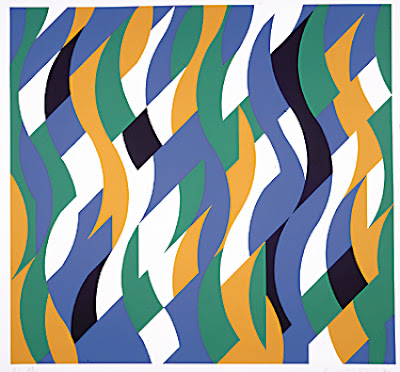 British artist Bridget Riley has become the first woman to receive the Sikkens Prize, a prestigious Dutch art award that recognises the use of colour.

The 81-year-old's work is renowned for its abstract geometrical shapes and for what the Sikkens Foundation called its "purity, subtlety and precision".

To mark the prize, the Gemeentemuseum in The Hague is hosting an exhibition of her art that will run until June.

"I hope people will find things in it to look at," Riley told The Guardian.

According to the Sikkens Foundation, Riley's use of colour has led to "a sensational oeuvre from which a new generation of artists is drawing inspiration".

"One of the difficulties that many people seem to have with my work is what they complain of as dazzling," Riley told the BBC in 2010, the year the National Gallery in London presented a major exhibition of her work.

"What I was interested in was visual energy and the dynamics of how you could build up a situation that produced a sensation."