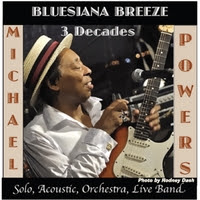 Something of a curiosity is Michael Powers. A longstanding bluesman with a pedigree going back to Jimmy Reed, his recent output could be said to be somewhat erratic. While 2007’s ‘Prodigal Son’ seemed to herald a mainstream breakthrough with its confident blend of blues, funk and psychedelic rock, later releases including last year’s ‘Revolutionary Boogie’ seemed aimless and disinterested. This new collection gives little away in its sparse and sometimes confusing packaging (even the title ‘Bluesiana Breeze’ has been used before, for a collection of JJ Cale covers), so little prepares the listener for the curate’s egg within.

Instrumental all bar two songs the set draws from sessions which are variously solo acoustic, with full orchestral accompaniment, and with his full Powder Keg touring band, PKB. It’s thereafter that the plot thickens, since for the most part these tunes bare little or no resemblance to his more familiar blues-based material, often positioning themselves somewhere between Jim Hall and Julian Bream. In that respect they show a whole new side to Powers as a musician, being undeniably virtuoso displays of his craft which both engage and impress and collectively make for an admirably enjoyable album, if ultimately begging the question ‘where next?’.
www.michaelpowers.com
Neil B.