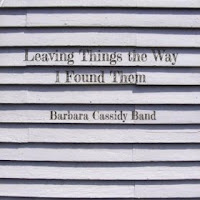 The Barbara Cassidy band is comprised of Barbara Cassidy (no surprise there), Cassidy’s husband Eric Chasalow, and guests. Cassidy’s roots are firmly embedded in musical theatre and cabaret, and in the world of independent music, she’s something of a rarity, insofar she’s a professional singer, and a fine one at that. Her vocal rings out clear and true throughout “Leaving Things The Way I Found Them”, a collection of folk songs, old and new, traditional and original.

Chasalow is a classical composer and musician of some renown, but has always maintained an interest in pop music; its composition and songwriting. Sadly, he wasn’t a natural lyricist, but Cassidy is, and she taps effortlessly into an American story-telling-folk tradition, and does so in a way that seems utterly authentic, even recalling her own family history on “Anna's Song - Shohola, 1864”. It’s a genuine standout track, the sort of song that gets the hairs rising on the back of the neck, and that’s by no means a unique experience. “If Time Stood Still” is a classic country rocker in the vein of Great Speckled Bird, their take on “Wayfaring Stranger” is intense and very nearly noble, and the first song they wrote together, “Banks of the Galena”, suggests an almost instant musical understanding.
www.barbaracassidyband.com
www.facebook.com/The-Barbara-Cassidy-Band
Rob F.