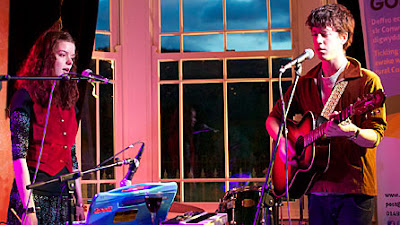 TRWBADOR in advance of their debut April album, Trwbador have announced a UK Tour and will play the following dates:

Trwbador are a boy/girl duo from Carmarthenshire in South Wales featuring the exceptional talents of half Welsh, half Dutch singer and producer Angharad Van Rijswijk alongside the intricate guitar playing and hip hop style productions of Owain Gwilym.  Operating from the attic of a flat they share in rural Carmarthenshire, they write down and record all of their sounds, making music like no one else.  You can find out more at www.trwbador.co.uk or www.owletmusic.com .

Angharad’s beautiful and fragile voice underpinned with Owain’s intricate acoustic guitar  fingerpicking was showcased through 2 EPs they recorded in 2011.  This quickly garnered support from the likes of radio DJs, Huw Stephens, Adam Walton, Bethan Elfyn, Radcliffe and Maconie and Lauren Laverne.  Their talent and beauty has not gone unoticed among fellow musicians either.  Plaudits have come in thick and fast from artists such as James Dean Bradfield, Euros Childs, Laura J Martin and Cornershop leading to a string of collaborations including the Christmas single by Cornershop ‘Every Year So Different’, which features Angharad on lead vocals.

This is the duos first album and their best work to date.  These 10 songs showcase the duo’s ability to soak in influences from everywhere and use them to full effect.  There are references here to traditional folk, avant garde, 80s Pop, rave, hip hop and many more.   The fact that these elements are combined in such a self-aware and fun way make the album a treat of a journey with many twists.  The sound is characterised by off-kilter electronica, jumpy cut edits, deep and warm analogue synthesizers, the intricate nuances of acoustic guitar and of course Angharads sweet and dreamy vocal croon, which she uses to full effect through looping, counterpoint and a host of subtle effects.  Through slow tempo changes, time signature shifts, through structures and improvisation sections Trwbador add interest to stagnant pop song structures.  This has led to their sound being described as ‘Avant Pop’.  The album contains many colaborations, most notably Cornershop who provide the sitar and tamboura to Sun In The Winter, which in a previous demo form has been the ‘MPFree’ on the BBC 6 Music Lauren Laverne Breakfast Show.

Trwbador are spending February in Mumbai as part of a British Council exchange, where they will perform at a major festival as well as a number of more lo key events.  After this they will play 4 dates at the start of March in London, Cardiff, Liverpool and Leicester to celebrate the albums release.