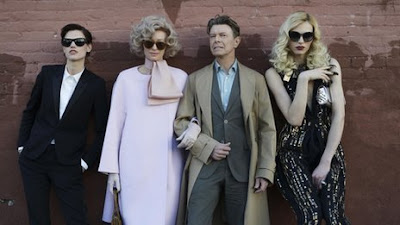 Oscar-winning actress Tilda Swinton has hit the small screen, playing the role of David Bowie's suburban wife in the video for his latest single.

Swinton, whose best supporting actress Oscar in 2007 was for George Clooney thriller Michael Clayton, is seen shopping with Bowie and watching TV.

She has starred in one other music video - Orbital's The Box - which was up for best video at the 1997 Brits.

The video with Bowie was directed by Floria Sigismondi.

Sigismondi also worked with Bowie on his video for Little Wonder in 1996 and Dead Man Walking in 1997. 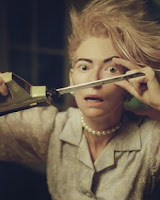 She has directed videos for musicians including Muse, Katy Perry, The White Stripes, The Cure, Bjork, Leonard Cohen and Marilyn Manson.

Swinton recently appeared in Wes Anderson's Moonrise Kingdom, which launched Cannes film festival last year, and she starred in 2011's critically acclaimed We Need to Talk About Kevin, as a mother coming to terms with her son's part in a high school massacre.

The Stars (Are Out Tonight) is Bowie's second offering from his forthcoming album The Next Day - his first new material in 10 years.

A statement on Bowie's website said: "This story at once captures a twenty first century moment in its convergence of age, gender and the normal/celebrity divide."

It already has critics singing its praises, with the Daily Telegraph's rock and pop critic Neil McCormick saying it is "teasing us with ideas of Bowie both as an aging recluse and an ageless androgynous rock star".

"It is the return of the master, showing every other rock and roll star, old or young, how things should be done," he added.

See / hear David Bowie’s The Stars (Are Out Tonight) here.