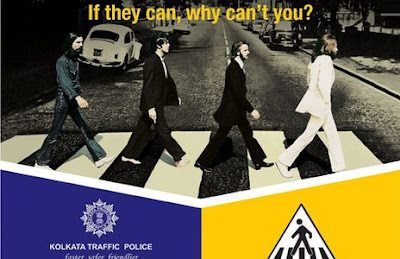 Police in the eastern Indian city of Calcutta are using the picture on the cover of the iconic Beatles album Abbey Road in a campaign to enforce road safety.

The picture shows the band members walking in single file on a zebra crossing in north London's Abbey Road.

The slogan for the campaign reads: "If they can, why can't you?"

The Beatles were photographed on Abbey Road in Ian Macmillan's famous cover shot for the 1969 album.

The crossing is outside the Abbey Road studios, where the band recorded much of their music.

Calcutta's traffic police has put up 40 hoardings carrying the Beatles image as part of a campaign to persuade people to use pedestrian crossings.

"We wanted a catchy and appealing campaign, and we hit upon the idea of using the Beatles and cash in on their universal popularity. We are trying to say that if John, Paul, George and Ringo could use the zebra crossing, you can also do it," joint commissioner of traffic police Supratim Sarkar told the BBC.

"We will be able to tell after a couple of months whether the campaign worked."

Calcutta resident and musician Neel Dutt told The Telegraph newspaper that he was happy with the campaign.

"Calcutta has had a long love affair with The Beatles and if that can make people abide by rules, then nothing like it," he said.

Others were more sceptical.

"Don't waste time and money putting up these hoardings that may be understood only by elite 2% of the people, and that too not those who tend to walk on the streets too much," resident Sanjiv Kapoor wrote on Calcutta traffic police's Facebook page.

"Instead spend the money on making zebra crossings at the right places, and educating drivers and ordinary pedestrians on what they are for! If people today actually use them as shown in the photo, they will be run over before you know it!"

The original Abbey Road zebra crossing, where the photograph was taken, was moved several metres for traffic management reasons more than 30 years ago, and no original features remain.