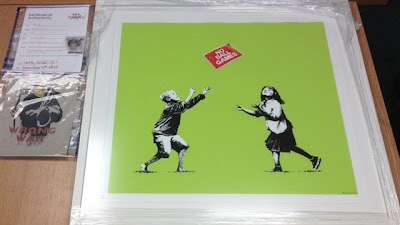 An original work by the artist Banksy has been recovered by police investigating a suspected fraud.

The piece, called Wrong War, and a print signed by the graffiti artist were bought by a customer in south London for £12,990 last month.

But two weeks after delivering them, the dealer who sold the works learned that the cards used to buy the pieces had been used without authorisation.

Police arrested a man in Plumstead, south London, on 8 February.

The man, 25, has been bailed pending further inquiries.

The suspected fraud came to light when the art dealer, from Essex, received bank letters stating that the cards used to buy the images did not have the authorisation of the cardholders.

Both payments were cancelled and refunded to the cardholders, leaving the dealer without the artworks and out of pocket.

The Metropolitan Police began an investigation when, in the meantime, the suspect contacted the art dealer again in an effort to buy more Banksy artwork.

Officers were informed about this order and made the arrest. They also searched an address in Charlton, south-east London, believed to be linked to the suspect, where they recovered Wrong War.

The signed print, entitled No Ball Games, was recovered after a member of the public bought it from the suspect and became suspicious of the transaction, police said.

The buyer contacted the Essex art gallery directly and returned the artwork.

Det Sgt Geoff Grogan, from Greenwich CID, said: "We acted very quickly after the victim contacted us and this gave us the opportunity not only to make an arrest, but also to recover the artworks.

"We believe that there may be more than one person involved.

"We are also in the process of contacting the card-holders who were unaware that their cards were being used.

"Our investigation is still open and will continue."