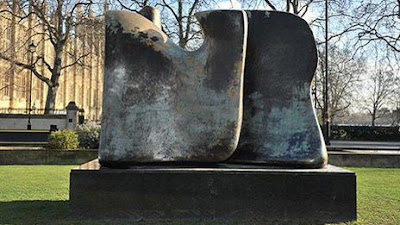 A Henry Moore sculpture opposite the House of Lords is to be restored over an eight-week period, beginning on 16 February.

MPs ruled two years ago that the restoration of Knife Edge Two Piece should be the responsibility of the Parliamentary Art Collection.

Situated on Abingdon Street Gardens, it was gifted to the nation in 1967, but no plans were made for its future care.

It has graffiti on it and an original golden patina has gone black in places.

Natural oxidation of the bronze has also affected its appearance, resulting in "green copper corrosion salts", according to the speaker's advisory committee on works of art.

The artwork is often a backdrop to political news reports filmed outside Parliament.

All of the conservation work will be undertaken by Rupert Harris Conservation who will work in consultation with The Henry Moore Foundation.

The cost of conservation is £16,190, while making the work site compliant with health and safety regulations will cost a further £15,855. A grant of £11,000 has been received from The Henry Moore Foundation to support the conservation finances, while the remainder will be paid from existing Parliamentary budgets.

Much of the work will be done by hand and will include the removal of the remnants of the protective lacquer and surface dirt. Corrosion and oxidation will be cleaned, taking the sculpture back to bare metal.

Graffiti and pitting caused by corrosion will removed by very carefully rubbing the sculpture, again by hand.

It will then be returned to its original golden brown colour and waxed so it has a protective weatherproof surface.

Conservation will then be ongoing, with regular rewaxing in an effort to maintain the sculpture's improved appearance.

Frank Doran MP, chair of the speaker's committee, said: "After years of neglect and uncertainty, the House of Commons is pleased to be able to help return Moore's important public sculpture to its original condition.

"By undertaking responsibility for the work, Knife Edge Two Piece will be preserved for future generations, as per Moore's intentions."

Anita Feldman, head of collections and exhibitions of The Henry Moore Foundation, added: "Following re-erection of Moore's Arch in Kensington Gardens, this project represents another huge stride in the preservation of Moore's public sculptures in London."

Moore, who died in 1986, said he loved the site where the sculpture was placed "so much that I didn't bother to go and see an alternative site in Hyde Park".

"It is next to a path where people walk and it has a few seats where they can sit and contemplate it," he said.

But not everyone appreciated the sculpture, with former Conservative backbencher Neil Marten asking in the House of Commons why "this lovely part of Westminster should be littered with something that looks like a crashed unidentified flying object".

Restoration had originally been intended to begin on the sculpture in early 2012, to be completed in time for the Olympics.