Picasso portrait of mistress sold for £28m at Sotheby's 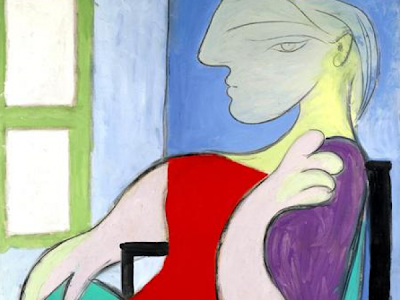 One of Picasso's portraits of his mistress, Marie-Therese Walter, has been sold for £28.6m at Sotheby's.

The 1932 piece, entitled Femme Assise Pres d'une Fenetre (Woman Sitting Near a Window), was the centrepiece of Tuesday night's auction.

Helena Newman from Sotheby's said: "This portrait is a striking and notably modern-looking work from one of the artist's most celebrated periods."

In total, the impressionist and modern art sale raised £121m.

It was the second-highest haul for a Sotheby's evening sale in that category in London, with 18 lots selling for more than £1m.

His 1914 Selbstdarstellung mit Wally (Lovers - Self Portrait with Wally) was sold for £7.9m, a record price for a work on paper, while Self Portrait in Green Shirt with Eyes Closed went for £5.1m.

"Bidders, both new to the market as well as seasoned buyers, reacted with great enthusiasm, in particular to the selection of impressionist works that were considered to be the strongest offering in many years," said Newman.

On the Picasso sale, which saw a final bid of £25.5m, rising to £28.6m with the buyer's premium, Newman added: "We are delighted that this stunning and monumental portrait, which is part of the defining series that introduced his 'golden muse' to the public eye, fetched such a strong price.

"In recent years in particular we have witnessed the remarkable allure of Picasso's portraits of Marie-Therese to collectors.

Marie-Therese, who Picasso called his "golden muse", was the artist's mistress from 1927 to 1935. Their relationship began when he was 45 and she was just 17.

The pair, who had a daughter, Maya Widmaier-Picasso, split when Picasso found a new mistress, Dora Maar.

Marie-Therese was the focus of several portraits by the post-impressionist, including the 1932 work La Reve (The Dream).