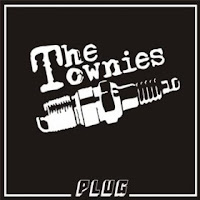 Massachusetts five-piece The Townies got together in 2008 when three former members (David Shorey, Jeff Bacon and Doug Cowan) of Maine band Between Dreams reconvened and recruited a new rhythm section of Sean W. Hennessy on bass and Gordon Smith on drums. They released their debut album “One For The Ditch” to some acclaim in 2010, and now, three years later, they’ve followed it with “Plug”, an eleven-track collection that should cement their reputation.

Produced by the celebrated Paul Q. Kolderie, whose previous credits include Warren Zevon, Radiohead and Pixies, “Plug” bursts from the traps with joyful intent. “Grow On You” provides a fabulous launch. Its alt. pop stance brings to mind Lemonheads, Dandy Warhols and Fountains Of Wayne. Sure, there’s an element of power-pop to what they do, but there’s also a depth and quirkiness to their writing that blows away the clichés inherent in the genre.

They’re also not scared of a riff. “Never Be” arrives on a huge one, and guitarists Bacon, Shorey and Cowan have some fun. Indeed, fun and enjoyment seems intrinsic to their approach, and it’s wholly infectious. It’s nigh on impossible not to be swept up with their enthusiasm, and the fact that they relentlessly ply the listener with strong original songs, massive hook-laden choruses and tunes that stick around long after they’ve finished obviously helps. Simply put, great tracks come thick and fast. “Freakshow” takes its inspiration from “Pleased To Meet Me” Replacements; “Irish Smile” is a perfect pop thrash and “Roll” is a massive hit single on a world with better taste than ours.
www.thetownies.net
www.facebook.com/The-Townies
www.thetownies.bandcamp.com
Phil S.