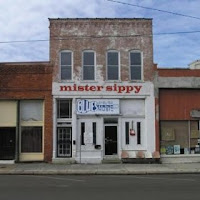 A big hit in their home-city of Melbourne, Australia, Mister Sippy describe themselves as a stomping, swamp blues, funk-o-billy four-piece, and they’re not far wrong. Their six-track, self-titled debut is full of vim and energy, and combines Fat Possum-style electric blues with a raggedy rock ‘n’ roll stance. It all sounds incredibly fresh and inviting, and it’s delivered with a level of musicianship and professionalism, which never sounds slick or over-produced, but consistently impresses throughout its 26-minute duration.

There’s no room for filler on a record of this length, and the band (Marshal Sayer, Max Maxey, Roger Brown and Dr. Russell Gruen) are in complete accord. From the opening bars of “Leave Me and My Woman Alone” they barely waste a note. Frontman Sayer plays a mean harp, which’ll remind a select few of The Red Devils’ Lester Butler (though there’s probably an old blues guy that influenced both of them), and on tracks like Butler’s own “Going to the Church” and a blistering take on R.L. Burnside’s “Skinny Woman”, he shows just how good a harp can be when used as the lead instrument in the right blues-rock setting.

Gruen and Brown keep the beat tight but fluid, and guitarist Max Maxey is neither showy nor indulgent, but takes a razor sharp lead whenever called upon, and his hard driving style might just be the perfect foil to Sayer’s sinuous harp.
www.mistersippy.com.au
www.facebook.com/mistersippy
www.reverbnation.com/mistersippy
Phil S.