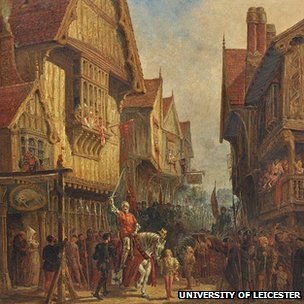 A Victorian painting of Richard III in Leicester has been bought by the university for more than £7,000.

The picture shows the king outside the Blue Boar Inn, setting out to meet his fate at the Battle of Bosworth.

The university said it was important a work by a local artist depicting such a significant moment in the region's history should be kept in the city.

Last year a team from the University of Leicester discovered and later identified the remains of Richard III.

"A picture of Richard III at the Blue Boar Inn was a 'must have' for the University, especially as it was painted by a local artist, and is an accurate portrayal of the inn and links to our world-class research. It will be a valuable addition to our art collection."

Richard III was reputed to have stayed at the inn on 20 August 1485 before setting out to Bosworth, where he was killed by the forces of the future Henry VII.

His body was buried in a city church but the location was lost when the building was demolished.

An exhibition about the archaeological dig for Richard III's remains has attracted 15,000 visitors in its first two weeks.