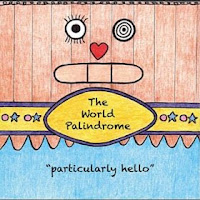 Although previous incarnations (The Royal Palestine and The World Palestine) have been full band line-ups, for “Particularly Hello” and latest name change, The World Palindrome, we’re now down to just the one member, Les Easterby.

He cites influences as far and wide as New Kids on the Block, right through to the noise workouts of Jim O’Rourke. To simply sum up his style, it’s a lo-fi blend of progressive rock, new wave and shoegaze, with pop perfect vocals, where exceptional melody meets dischord, dissonance and occasional experimentation. His tired and lazy (not quite dreamy or lysergic) lyrical delivery contrasts nicely the jagged and rougher edges, which fizzle with low-key antagonism.

Tracks of note are the title track, “Cut The Cake” with its marimba-esque underpinning, the very brief “The Zap”, “Marital Bliss” with its outrageously tuned (or un-tuned) guitar and the finale, “Trombone Moan pt 1 & 2”, which is two-thirds a Red Crayola type freakout with an Ian Dury and the Blockheads demo (Sello)taped to the end.
www.facebook.com/theworldpalindrome
www.airhouserecords.com
Willsk