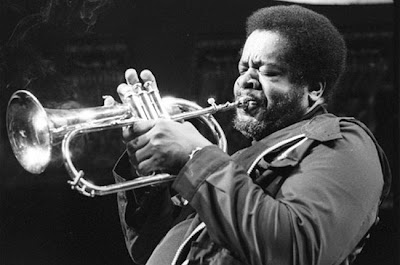 Influential US jazz trumpeter Donald Byrd, who performed alongside the likes of Sonny Rollins, Thelonious Monk and Herbie Hancock, has died aged 80.

The musician was a leading hard-bop trumpeter - a jazz extension of bebop - in the mid-1950s.
He later became known for his blend of soul, funk and jazz fusion.

Byrd's influence has been more recently felt thanks to hip-hop artists such as Nas, Ludacris and A Tribe Called Quest who have all sampled his recordings.

Born Donaldson Toussaint L'Ouverture Byrd II in Detroit, Michigan, Byrd got his start playing in military bands in the Air Force and moved to New York City in 1955.

He then rose to prominence when he joined Art Blakey's Jazz Messengers - replacing his idol Clifford Brown - and soon became one of the most in-demand trumpeters.

In 1958, he signed a record contract with the Blue Note label and formed a band with baritone saxophonist Pepper Adams, releasing their debut album, Off to the Races, a year later.

"Donald had this beautiful tone and had a very lyrical sense of playing and a real sense of melody,'' Hancock told news agency AP, adding Byrd had been a key influence early in his career.

He said Byrd took him "under his wings" when he was a struggling musician in New York, even letting him sleep on a sofa-bed in his Bronx apartment for several years.

In the 1960s, after receiving his master's degree from the Manhattan School of Music, Byrd turned his attention to jazz education.

He became the first person to teach jazz at Rutgers University in New Jersey and started the jazz studies department at Howard University in Washington DC.

In the 1970s Byrd moved toward a more commercial sound and his 1973 release Black Byrd, was the label's biggest selling album at the time.

He then formed the group, The Blackbyrds, made up of several of his best students at Howard University and scored US hits with albums Street Lady, Stepping Into Tomorrow and Place and Spaces.

From the 1980s, Byrd focused more on education and received a doctorate from New York's Teachers College at Columbia University and later twice served as an artist-in-residence at Delaware State University.

"He has always nurtured and encouraged young musicians," Hancock said. "He's a born educator, it seems to be in his blood, and he really tried to encourage the development of creativity.''

Once of Byrd's last performances was on rapper Guru's 1993 jazz-rap album, Jazzmatazz, Vol 1.

Nas sampled the musician on his 1994 hit NY State of Mind, while A Tribe Called Quest sampled his work on 1990's Footprints.