Review: Flavia And The Red – Too Late To Cry

Flavia And The Red – Too Late To Cry (Independent) 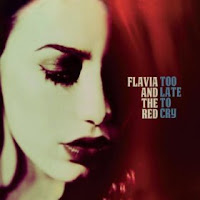 2012 was a breakthrough year for Flavia And The Red. The Los Angeles quintet were chosen to play Summerfest, the world’s largest music festival, they landed bi-monthly residencies at two of the hottest clubs in their home-city and, at the end of the year, they released their debut album, “Too Late To Cry”.

Flavia Watson sings and writes the majority of the material, and she excels at both disciplines; instilling jazz, funk, soul and pop hooks in and around a sophisticated blues-rock setting. Her band, The Red afford outstanding support, and the level of musicianship and supple arrangements allows the singer plenty of room to properly explore her songs.

The launch the album with “Whiskey and Lace” and their capabilities are made apparent almost instantly. Flavia’s voice is rich and soulful, and guitarist Chris Pucher and keys-man Rich Brown work together providing melodic nuance and understated zeal. The unexpected result is a sound that hovers intriguingly between a nightclub lounge and the swamp.

It’s the first of many highlights; the title track employs a classic walking rhythm, courtesy of drummer Isaac Watts and bass-man Max Benson; it’s sultry and steamy, and not unlike Peggy Lee’s “Fever”. Fans of Imelda May should investigate pronto. At the other extreme, “Out in the Cold” is wonderfully jazzy and chic, with Pucher and Brown on particularly fine form.
www.flaviaandthered.com
www.facebook.com/flaviaandthered
www.soundcloud.com/flaviaandthered
Phil S.