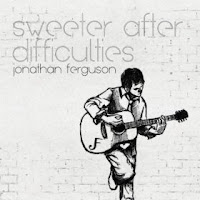 Calgary singer-songwriter Jonathan Ferguson appears to be an authentic throwback to a time when the song and its melody were everything, and distractions like image and rampant promotion were inconsequential or simply avoided. Of course, those things were always important, in various degrees, and a non-image is an image in itself. Still, Ferguson certainly gives the impression of an uncomplicated singer-songwriter, with stories to tell and tunes to share.

“Sweeter After Difficulties” is Ferguson’s debut collection, and unsurprisingly, in his native Canada it has considerably raised his profile. The 13 songs are distinctive and engaging, with production that varies from lush strings and full band arrangements to simple, percussive guitar strums. Whatever the approach, Ferguson places his words high in the mix and centre stage, singing his songs about ordinary people and the situations in which they find themselves; quite possibly the only real definition of folksong.

As with the majority of songwriters, Ferguson rarely writes about himself. Instead taking on characters and themes that range from unrequited love to conflicts of conscience, but as the title suggests, the ability to overcome these trials and tribulations is where strength is to be found. There is no shortage of standout tracks on “Sweeter After Difficulties”. Opener “Ballerina” sets a scene of love gone awry, and “House On the Water” is all about escape. Perhaps my favourite is “Sunrise At the Airport”, a paean to love, and it’s a big hook-laden pop song, which, if there were any justice, would be taking up residence on a radio near you.
www.jonathanferguson.ca
www.facebook.com/thejontourage
www.jonathanferguson.bandcamp.com
Tony S.