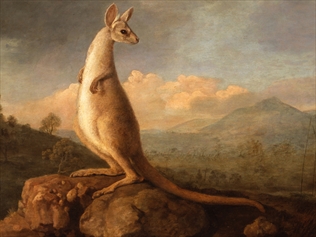 The UK government has taken steps to keep in the country two oil paintings that gave the 18th Century British public their first chance to see what a kangaroo and a dingo looked like.

A temporary export bar has been placed on the two George Stubbs works, which went on display in London in 1773.

However, potential buyers will have to come up with £5.5m if the paintings are to stay in the UK.

Stubbs was unable to paint the animals in the flesh so used spoken accounts.

He also made sketches after inflating the preserved skin of a kangaroo.

The Kongouro From New Holland (The Kangaroo) and Portrait of a Large Dog (The Dingo) were first shown at London's Royal Academy in 1773.

They have been praised for bringing the animals, most closely identified with Australia, to the attention of the British public.

The works are thought to have been commissioned by Sir Joseph Banks following his part in Captain James Cook's first voyage of discovery to the Pacific.

Culture Minister Ed Vaizey announced the export bar following a recommendation by the reviewing committee on the export of works of art and objects of cultural interest.

Committee chairman Lord Inglewood said it would be a "terrible shame" to lose the "extraordinary paintings" to an overseas buyer.

"They were the British public's first introduction to these exotic animals from the Australasian New World which was opening up at that time," he said.

The export bar remains in place until 5 August, and can be extended until 5 November if a serious intention to raise funds to buy the paintings for £5.5m is made.