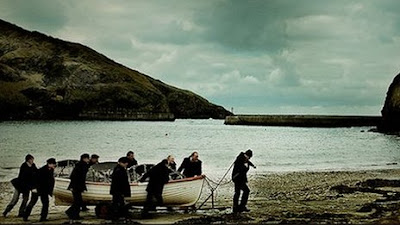 The tour manager for the shanty group Fisherman's Friends has been killed in an accident at a music venue.

The accident happened at 11:45 GMT on Saturday - hours before the Cornish-based group was due to perform.

A statement issued on behalf of the group's management team said Mr Grills remained in hospital.
"There is no update on his condition," it added.

Darcus Beese, president of the group's label Island Records, said: "Everyone here is shocked by this tragic event, our hopes and prayers go out to the friends and families of those involved."

A statement from G Live said a serious accident had resulted "in the tragic death of a member of a touring visiting company's personnel".

"This is a terribly sad day and our thoughts are with the family of the deceased at this incredibly difficult time," it said.

Surrey Police is investigating and the Health and Safety Executive - which investigates work-based accidents - has been notified.

Police were called to the London Road venue just after 11:45 GMT on Saturday after a report that two men were trapped under a metal door.

Surrey Police said one of the men, Mr McMullen, suffered serious injuries to his legs and died at the scene.

Mr Grills was taken by ambulance to St George's Hospital in Tooting, south London, where he is in a critical condition.

Shirley Gladwin, a friend of one of the singers from the Port Isaac-based group, said: "It's very sad, because they are so popular and do so much for the village.

A spokesman for the group Said The Maiden said: "We are deeply saddened by the news of the accident in Guildford yesterday. Paul was an amazing man, who gave us a fabulous opportunity to sing for the Fisherman's Friends.

"We feel honoured and grateful to have been able to work with him. Our thoughts and prayers are with his family and the guys tonight."

Fans have posted tributes on the Fisherman's Friends' Facebook page.

One from Nicola Eastwood said: "We were due at the gig, so, so sorry to hear what happened. Tragic. Our love, thoughts and best wishes to everyone involved."

The Fisherman's Friends were given a £1m recording contract after being discovered by music industry bosses during a pub concert.

They have since performed at the Glastonbury Festival.

Ealing Studios is working on developing a film charting the rise of the a capella group.