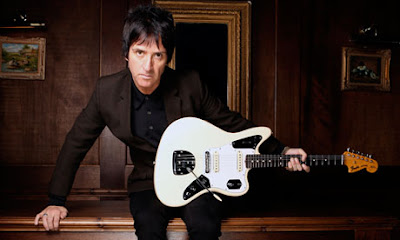 Former Smiths guitarist Johnny Marr will be awarded with the Godlike Genius accolade at this year's NME Awards.

The event takes place on 27 February at The Troxy, an east London gig venue.

After recording with Modest Mouse and The Cribs, Marr releases his debut solo record, The Messenger, two days before the music magazine's annual ceremony.

Marr said he is "honoured" to be the next recipient of a gong that The Clash, Paul Weller and Noel Gallagher have won in recent years.

"It is a very nice thing to be getting this award," he said. "The NME seems to be good at giving this award to people I like, so I'm in good company. I guess it means that some things are alright with the world."

Marr left The Smiths in 1987 and later worked with the likes of The Pretenders and The The. He lead his own band Johnny Marr + The Healers and has contributed to recordings by former Red Hot Chili Peppers member John Frusciante, Talking Heads and Beck.

He parted ways with The Cribs after four years in 2011 to focus on his solo material after early recording sessions for what would be the Jarman brothers' fifth studio album, In the Belly of the Brazen Bull.

NME editor Mike Williams said: "Never has anyone been so utterly deserving of the title.

"Not content with rewriting the history of music with one of the world's greatest ever bands, The Smiths, he's continued to push boundaries and evolve throughout his career, working with some of the best and most exciting artists on the planet."