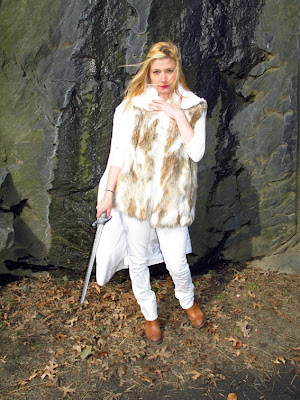 New York guitar goddess, Marnie Stern, has just announced that she will be coming to the UK at the end of May.  Her new album, The Chronicles of Marnia, which is out 18th March on Kill Rock Stars, finds Marnie not only working with a new drummer (Oneida’s Kid Millions), but subtracting from her normally dense song structures to craft a sound that is both familiar and wholly original.

Marnie Stern shares a third single from the album.
Listen to the track Nothing Is Easy
The musical transformation evident on Marnie's new album isn’t entirely unexpected, as fans who have listened to both “For Ash” and “Every Single Line Means Something” in a single sitting know. That same slow progression can be seen between 2010’s self-titled album and the forthcoming The Chronicles of Marnia.  Even as Marnie evolves from what Pitchfork called her “art-metal math-rock bubblegum pop” genre, fans will still find themselves jumping head first into the album and quickly bonding with the emotionally resonant material, cascading hooks and transcendental guitar riffs.  Plus, the album shreds.  She is Marnie Stern after all.