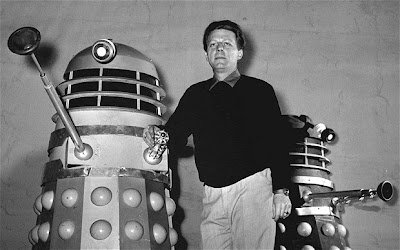 The designer of the Daleks from the BBC's Doctor Who has died aged 84 after a short illness, his daughter has said.

The Daleks became the iconic villains in cult science fiction series Doctor Who, which is due to mark its 50th anniversary with events this year.

The official Doctor Who Magazine tweeted: "It's with great sadness that we report the death of Ray Cusick - the designer of the Daleks. Half a century on, his iconic design lives on."

Doctor Who actor and writer Mark Gatiss tweeted: "Farewell to the great Ray Cusick. His passing is especially sad in this anniversary year but his creation remains immortal. Daleks forever!"

The designer gave form to the concept of the Daleks, created by Doctor Who screenwriter Terry Nation and which first appeared in series one of Doctor Who nearly 50 years ago.

In the show, the race of Daleks was said to have been developed by a scientist to survive a war on their home planet of Skaro. However, the scientist was later killed by his own creation.

The Daleks, mutants encased in studded, tank-like machinery that appear to glide over the ground, became a cultural sensation, with generations growing to love their famous electronic command of "Exterminate".

In a 2008 episode of BBC Three's Doctor Who Confidential, Mr Cusick visited the BBC props department and explained his inspiration for the design of the Daleks, which has changed very little over the years.

"People do say I was inspired by a pepper pot - but I always think 'If that's all it takes to become a designer then it's a doddle'."

He explained that, in fact, the pepper pot detail came from a lunch with Bill Roberts, the special effects expert who would make the Daleks, when Mr Cusick picked up a pepper pot and moved it around the table, telling him: "It's going to move like that - no visible means."

"Ever since then people say I was inspired by a pepper pot - but it could have been the salt pot I picked up," he said.

He went on: "When I'm asked what I was inspired by I suppose it was really a system of logic because I realised that you've got to have an operator to operate them. If you had anything mechanical, 10 to one on the take it would go wrong, so you've got a human being in there who would be absolutely totally reliable...

"I then thought 'Well, the operator's got to sit down', [so I] drew a seat, ergonomic height, 18in, got the operator down, and then drew round him. That's how the basic shape appeared."

David Graham, who created the original voice of the Daleks, said the villains' success in frightening generations of viewers was a combination of "brilliant design" and the synthesised voice added to it.

He said Mr Cusick was responsible for "one of the most iconic designs of television sci-fi".

"They captured the imagination of so many people. It was a wonderful thing," he told BBC Radio 5 live's Stephen Nolan show.

Nicholas Briggs, who voices the modern Daleks, said the show would not be the same without them.

"Extinction is not an option - If you say Doctor Who to someone in the street about the second thing they're going to say is 'Exterminate'," he said.

"Lots of my friends who are not Doctor Who fans think that the programme is 'Doctor Who and the Daleks' - that surely the Daleks are in it all the time - which isn't true but that is the impression.

"That's the brilliance of the creation of the Daleks. They've made an indelible stamp on the series really."