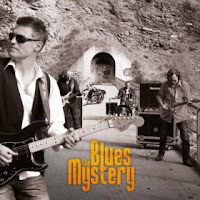 The Blues Mystery came together at the end of 2009 in the mountains of Switzerland. You may reason that the Swiss Alps isn’t a natural birthplace for a blues band, but if ever a genre has transcended any notion of a natural birthplace, then it’s the blues. The quartet, Willy Matt (vocals, guitar), Irénée Pralong (guitar), Walter K. (bass, vocals, harp) and Gege (drums, vocals) are far from purists, but fans of early ‘80s Stones (circa “Undercover”), ZZ Top and Stevie Ray Vaughan’s Double Trouble will probably find plenty here to enjoy.

They launch their debut self-titled album with “Nothing to Hide”, a slinky upbeat rocker, with bassman Walter K. and drummer Gege providing various rhythmic delights throughout its 3:32 running time. Guitarists Pralong and Matt add muscle and depth. It’s a fantastic first track and sets the album up for what follows. In fact it soon proves to be just the first of many highlights. “Let Me Smoke My Cigar in Peace” adds a little Traffic to the mix, and “Back to the Dirty Town” eases the pace, but the band remain as tight and emphatic as before, and Pralong’s solo is a slow-cooked joy – rich and heavy.

“My First Love” finds Matt on exceptional vocal form, with a song that develops almost note-by-note, and they bring proceedings to a powerhouse conclusion with the self-titled “The Blues Mystery (Version 2)”, an irresistible song-a-long, where the whole band shine.
www.thebluesmystery.com
www.facebook.com/The-Blues-Mystery
Tony S.