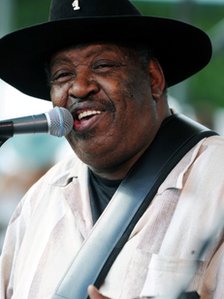 Slim had more than 30 albums to his credit since releasing his debut, Born On a Bad Sign, in 1977.

"There's probably not another bluesman who had quite the repertoire that Slim had," said his manager, Martin Salzman.

Slim died in hospital in Philadelphia where he was being treated for various ailments, Mr Salzman confirmed.

Born Morris Holt to Mississippi farmers in August 1937, Slim gave up the piano and turned to guitar after losing a finger in a cotton gin accident when he was 13.

He made his first trip to Chicago in 1955, starting off as the bass player for a friend and mentor known as Magic Sam, who allowed the younger musician to take his nickname.

Slim cut his first single, Scufflin, in 1966 and became a Chicago blues fixture in his own right, developing a guitar style that blended a distinct vibrato with a slide-guitar-like sound formed with his bare fingers against the strings.

The guitarist was recognised as much for his powerful, gruff vocals as his musicianship and was known for playing with picks on both the thumb and index finger of his right hand.

A heavy smoker who suffered from emphysema and heart problems, he cut short a tour with his band, the Teardrops, in late January, Mr Salzman said.

While Slim lived in recent years with his family in Nebraska, "Chicago was always like home to him," his manager said.