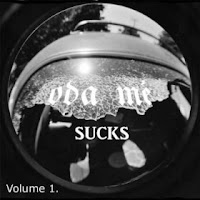 Odame (aka Joshua Grayem) comes from Sacramento. His Facebook biography reads: “My depression raped my excitement and my music was born”. As background information goes, it’s a little vague, to say the least, but somehow it encapsulates his raison d’etre precisely and with the minimum of frills. A scan of the web, and the various sales sites on which “Odame Sucks Vol. 1” is listed, provides few new clues to the man and his music. Indeed, most sites can’t even decide whether it’s a dance record, electronica or folk music.

The truth is, “Odame Sucks Vol. 1” is a dark mix of all three. Strings, synths and beats, sometimes with a song at the core. It’s a collection that occasionally jars and jerks, but mostly in a good way, and Odame’s got plenty to say, when he chooses to. He begins the album with a short instrumental piece. “Theme” is built on a metallic riff with dancing ‘80s electronica providing balance and a smidgen of humour. It’s followed by “T.G.T.I.E.D.”, an unsettling love song, and “22”, a second instrumental, fluid and strangely unstable.

“Amalgam” is just that, a six and half minute mix of walking synths, shuffling beats, and what may or may not be kitchenware. Maybe my favourite is “Tried”, which brings to mind the classic, early Matt Johnson records, and represents an appealing, flawed, humanist form of electronica.
www.facebook.com/odamemusic
www.odamesucks.com
www.myspace.com/odame
Phil S.