Review: Tammy Patrick – A Priority: Songs Of A Bower Bird

Tammy Patrick – A Priority: Songs Of A Bower Bird (Independent) 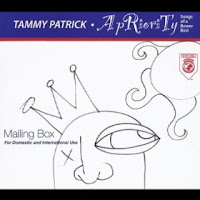 Born and raised on the prairies of the Midwest USA, Tammy Patrick took her first musical inspiration from her grandfather, who would sing Depression-era ballads. At college she recorded a trio of albums with Icemakers of the Revolution, before joining New York folk-rockers, the Dorkestra. When they split in 1996, she, and other ex-members formed the Bathtub Virgins, and recorded two more albums, including their much acclaimed debut “Summertime”, which was released concurrently with a film of corresponding videos that was shown at New York Film Festival in 1997.

Since 1998 Patrick has been based in Phoenix, Arizona, with her partner Jeff Farias, where they operate their own studio, and continue to record. As far as I can ascertain, “A Priority: Songs Of A Bower Bird” is their fourth album.

The first thing you’ll notice when listening to a Tammy Patrick album is the purity of her vocals. Like Nanci Griffith, with whom she’s often compared, she possesses a voice, which almost sounds like it’s been filtered through Appalachian mountain rock, simultaneously cleansed, enriched and fortified. She begins here with “Art Taken Alive”, accompanied by Farias on guitars and bass, it’s a confused narrative, which takes in murder, exotic strangers and basketball, but also celebrates a nostalgic family time, though it’s only half remembered.

“1st Anniversary Song” rolls along with a full band in tow. Again it’s a song about remembering, and although the references are vague, it’s the sturdiness of the arrangement and Patrick’s vocal that’ll impress most. When the words aren’t so oblique, she’s just as good; “Hen” recounts a pheasant hunt, and the imagery is lucid and clear, and when she sings Dolly Parton’s classic “Coat of Many Colors”, perhaps the most literal song here, she does so with confidence and poise, undaunted by the song’s status in country music circles.
www.tammypatrick.com
Tony S.