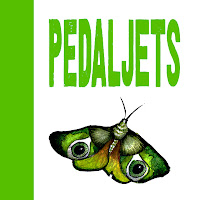 The Pedaljets’ story goes back to 1984 when the Kansas quartet was considered the missing link between The Replacements and Nirvana. They toured extensively, supporting most of the main players from the ‘80s alternative scene; Hüsker Dü, Meat Puppets, Flaming Lips, etc., and released their debut album “Today Today” to widespread acclaim in 1988. They released a second album a year later, but it was rushed and unfinished, and that disappointment, coupled with a non-stop touring schedule prompted the band to split in 1990.

That should have been the end of it, but fast-forward to 2006. Such was the feeling in the band that the second album was no way to end things, they returned to the studio to tighten up and fix the mix. The results were released in 2008, with a positive review in Mojo magazine their reward.

They’ve been playing and recording ever since, and the single “Riverview / Terra Nova” are the first songs released (we’ve been assured that an album will follow in the next couple of months). Available as a spiffing 7” single (pressed on snot green vinyl), it’s a firm indictment of the Pedaljets sound. “Riverview” is psychedelic grunge rock, with a massive guitar hook and lines about girls and dragonflies. “Terra Nova” leans toward a Wire-esque post-punk sound – the guitar needles and probes, and vocalist Mike Allmayer disengages like classic David Bryne or Anthony Moore. Catch ‘em if you can.
www.thepedaljets.com
www.facebook.com/The-Pedaljets
Rob F