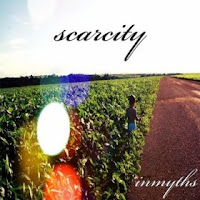 Inmyths are an intriguingly named six-member strong group from Lisbon, Portugal. Led by Hugo Almeida, they play a contemporary progressive style of folk-rock music, which has been compared to the work of David Sylvian, though there’s something a little more substantial to Inmyths, something easier to pin down, though no less engrossing.

Rooted in folk music, insofar as acoustic instruments are at the forefront of their sound, the layering of rhythms, strings, keyboards and vocals is calming and reassuring; yet dramatic twists and turns provide plenty of excitement. Separated into four parts, their episodic approach to “Scarcity” is interesting, though it hardly impacts on the listener, and the song flow feels natural and organic.

Lyrically, Almeida covers a range of subjects, some a little unexpected. “I Want to Be an Alien” is a particularly eye-catching title, and its Radiohead-esque sonic ambience adds to its otherworldly, off-kilter appeal. They begin the album with the instrumental “Underway”. Piano takes the lead, and tension is built and released, almost as if it was written to accompany a particularly anxious scene in a film – probably a thriller. “Laymen” concludes the opening section, its measured pace, forthright electric guitar and backing vocals providing a serious highlight.

It’s a collection that’s never less that absorbing, and when everything comes together – song, instrumentation, arrangement – as they do repeatedly, “Scarcity” is an album that can happily stand alongside the work of any of the artists previously mentioned.
www.inmyths.com
www.facebook.com/inmyths
Phil S.