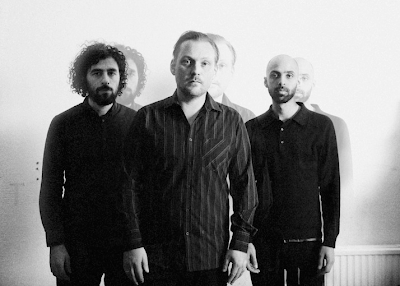 With their Village Underground show selling out within just a few weeks, and the release of their self-titled second album two months away, JUNIP today announce news of their biggest London headline show to date, performing at Shepherd's Bush Empire in September.

"Line Of Fire" is the first new material from the band since the release of their acclaimed 2010 debut album "Fields".

Featuring vocals by José González with Elias Araya on drums and Tobias Winterkorn on keys, “Line of Fire” showcases a bolder, more mature Junip – once again eager to embrace you with their infectious blend of percussion and passionate waves of genuine emotion. Unleashing opulent melodies atop of hypnotic grooves, the track splits itself into a dance between flamenco syncopation and Krautrock repetition, while González’s heartfelt vocals crest with unbridled sentiment and lead “Line of Fire” to its symphonic climax.

Junip avoided the protracted evolution of first album Fields and as a result resounds with immediacy. “We’d press ‘record’ when we started jamming, and end up with a pretty complete song structure when we finished,” González explains.