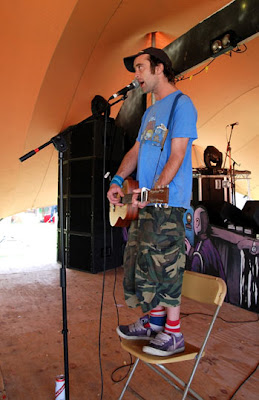 BEANS ON TOAST
Live In March

Beans On Toast is back on the road in the UK this March and will be playing plenty of songs from fourth album 'Fishing For A Thank You'.

This is just a small stint of shows, but will be followed by a full UK headline tour in May before Beans takes to the fields fro another Summer packed with festival slots. Expect laughs, tears, and plenty of melodic banter.

Beans On Toast's  fourth studio album 'Fishing For A Thank You', came out to high acclaim at the end of last year, Beans has written a career defining record that, in his own amiable style, deals with such matters as protests, love, drugs, religion, Wetherspoons pubs and angry birds with his perfected, witty social commentary. Bolstered by an accordion and a backing brass section, this is Beans' most complete and mature sounding record.

2012 was a very busy year for Beans On Toast:
Supported Frank Turner at his sold out Wembley Arena show back in April.
Spent the summer packing out tents at a string of summer festivals, including Blissfields, Secret Garden Party, Kendall Calling, Bestival and more.
Headlined his own incredible show at London’s Scala in September which was recorded for a live album to be released next year.

“4/5 Sunday Times for Standing On A Chair
“His songs are spiky and rough at the edges but are blessed with spice-of-life meaning, winning spirit and warm humour” The Mirror