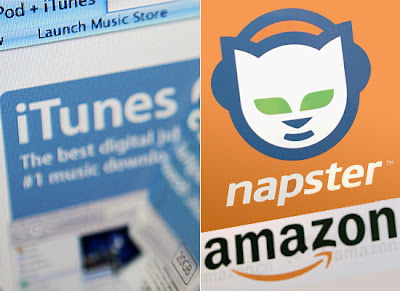 The inexorable rise of digital music, blamed by many for the collapse of high street retailer HMV, continues unabated in the UK, according to new figures.

Almost one in five consumers (19.6%) now prefers to buy all their music as downloads, says trade body the BPI.

Last year, 27.7% of UK music fans purchased downloads from stores such as iTunes or Amazon; or streamed songs on services like Spotify or YouTube.

Gotye's Somebody That I Used To Know was the most-streamed song of 2012.

It was closely followed by Carly Rae Jepsen's Call Me Maybe - with more than 3.7 billion tracks streamed in the UK in 2012, or 140 per household.

The streaming market is now worth £49m to record labels.

Spotify leads the field in terms of brand awareness, with figures revealing almost 70% of all consumers to be familiar with the Swedish service.

According to the BPI, four out of five of consumers have heard of at least one of the leading audio streaming services.

Spotify's own research shows Edinburgh to be the UK's top city for streaming in terms of per-capita usage, followed by Cardiff and Southampton.

On the release of the BPI's Digital Music Nation report, its chief executive, Geoff Taylor, said there had "rightly" been "a lot of focus in the past few weeks on High Street music retail".

"That will continue," he continued. "We must do all we can to serve music fans who love CDs and vinyl.

"But as well as great music stores, Britain is blessed with a world-beating array of digital music services."

The music fan, he said, would be "the clear winner as digital services evolve to deliver even richer music experiences".