Beyonce and Kings of Leon to headline V Festival 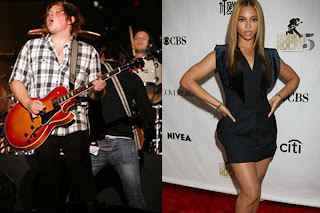 Beyonce and Kings of Leon have been announced as the two headliners for this year's V Festival.

The event takes place at Weston Park, Staffordshire and Hylands Park, Essex on 17 and 18 August.

Organisers say Beyonce's appearance will be her only European festival slot of the summer.

Winner of the 2012 series of The X Factor, James Arthur, will perform as will former winners of the show Little Mix.

Festival director Simon Moran said: "With our line-up already boasting acts including Beyonce, Kings Of Leon and Emeli Sande, the 18th annual V Festival is once again set to be an unmissable weekend.

"We have a reputation for bringing fans the best world class acts and breakthrough artists, 2013 is set to be another sensational year."

The US singer will play a run of shows in Birmingham, London and Manchester beginning in April.

Tickets for V Festival go on general sale at 9am on Friday 1 March with more acts to be announced.

Last year's event was headlined by The Killers and Snow Patrol.

Thinking of buying something on Amazon? Kindly use the link(s) below: