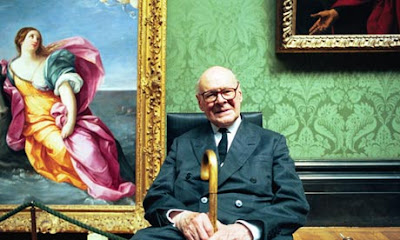 A £100m collection of paintings built up by art historian Sir Denis Mahon has been left to the nation - on condition that art lovers can see them for free.

The 57 Italian Baroque masterpieces were already on long-term loan to six British museums and galleries, including London's National Gallery.

This was on condition that no admission charge was made and they were not sold.

That condition has been extended as part of the bequest by Sir Denis, who died aged 100 in 2011.

The previous year, he celebrated his 100th birthday in the National Gallery, which will now keep 25 pieces from his collection.

Other institutions which will benefit from keeping the paintings for free are: the Scottish National Gallery in Edinburgh; the Ashmolean in Oxford; Birmingham Museums and Art Gallery; the Fitzwilliam Museum in Cambridge; and Temple Newsam House in Leeds.

Sir Denis, who was grandson of the Marquess of Sligo and was born an heir of the Guinness Mahon banking fortune, built up the collection over decades from the 1930s onwards, reportedly never spending more than £2,000 on an individual work of art.

His expertise of Italian art was such that in 1957 he was awarded the Medal for Benemeriti della Cultura by the Italian president for services to criticism and history of Italian art.

Sir Denis made the arrangement for his bequest via the Art Fund charity, with specific instructions on where the works should be displayed.

He also left the Art Fund a £1m cash bequest. Throughout his life, he had often made donations to support the charity which campaigns for wider public access to art.

The charity's director Stephen Deuchar said: "Sir Denis Mahon was a life-long supporter of the Art Fund and shared our fundamental commitment to widening free public access to art.

"His vision as an art collector was extraordinary, as was his determination that his collection should ultimately be on public display.

"It is an enormous honour for the Art Fund to have been entrusted with his private collection and to oversee its transfer into the permanent collections of these museums and galleries across the UK."