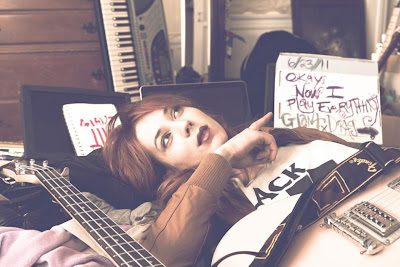 "They sound great when they're barely trying." - Pitchfork

www.giantdrag.com
www.facebook.com/GiantDrag
www.anniehardy.bandcamp.com
Front woman Annie Hardy has made the surprise announcement that cult lo-fi LA alt-rockers GIANT DRAG will self-release their long awaited sophomore LP "Waking Up Is Hard To Do" next week on Tuesday 5th March through Full Psycho Records. The first new material for seven years from the band, Hardy explains the reasons behind the hiatus in the following heartfelt statement:

“This LP has been a total curse on my existence; every time I team up with a record company or person to get this thing out something goes wrong and it just ends up sitting there like it has for 7 years now, so I am putting this thing out myself this coming Tuesday 5th March” says the singer.

“I want to engage people once again and make the rest of the world care as well. Basically the last couple years of my life were pure hell and I spent it (and my "success" period of GD) a slave to prescription drugs, only to go to rehab last October to get clean” Hardy explains “Legal battles were won and health problems have remained and I'm kind of getting honest with everyone for the first time. Since my family now knows I'm not afraid to tell truths about what's been holding me and my music back for so long. I've been through a lot surrounding addiction and dealing with issues of mental health watching my ex-boyfriend lose his mind (go Full Psycho). It's totally overwhelming but there's been a shift of perspective in me and I want to help other people if I can.  It's already turning out to be a wild ride and I think things will keep getting better. I hope if you survive listening to this record you'll be excited as I am about what’s to come.”

“I have no current plans to tour Giant Drag but Charlotte Froom and Tennesse Thomas from The Like will be helping me to reform GD for a select few shows to promote the record and say goodbye to the band properly so I can concentrate on my new project Annie Hardy and the Psychos as well as my pet project PnP. I will be finishing up recording EPs with Joe Cardamone of The Icarus Line, and of course the live LP Shredding Leeds is meant to be out right now but I stupidly committed to laborious hand-made vinyl packages for the fans so I'm working on that nightly.”

Killing Giant Drag is something Hardy feels like she has to do to move on, and giving these songs the airing they deserve is all part of the process. Fans of the band’s early work won’t be disappointed, as the heady swimming vocals, fuzzed-out rolling bass lines and poetic lyrics evident on ‘We Like The Weather’ and ‘90210’ are an instant reminder that Hardy is still a songwriting talent deserving of attention and, if anything, her experiences have made her stronger and imbued her songs with an undeniable passion and drive. “Yeah, this is happening” croons Hardy sarcastically on the unexpected lounge-jazz of ‘Messif My Face’, a track that shows a distinctly different side to the band with reverb laden guitar solos intertwined around tinkling ivories. As always when art imitates life, there’s a touching honesty that threads through the tracks on this release, not least on classic GD closer ‘Seen The Light’ with its gospel crescendo which sees Hardy proudly declaring “Now I feel alright. You want fame and adulation, I want my own home and a short vacation. Everything I hate in you is what I hate in me.”

Waking Up Is Hard To Do stomps, grooves and melts to a blissed out climax in all the right places and serves as an honest and timely reminder that sometimes after a fall, great talent just needs time to collect and take stock before it can breathe again. So what does Hardy see next for her future?

“I’m basically flying by the seat of my pants” she smiles “for the first time in a while.”

Waking Up Is Hard To Do is released on Full Psycho Records on Tuesday 5th March 2013 via www.anniehardy.bandcamp.com 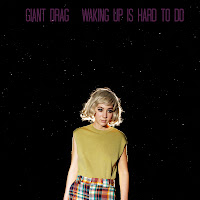