Review: Catch Release – Asleep Is A Friend Of Mine

Catch Release – Asleep Is A Friend Of Mine (Independent) 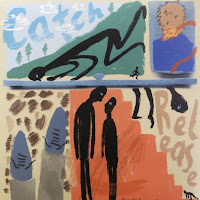 I’m sure Melbourne five-piece Catch Release will find themselves pigeon-holed as a folk group of sorts, though listening to their new six-track EP, there seems too many ideas and musical approaches for easy genre definition. Boasting an instrumental line-up that includes violin and French horn, complimenting the usual guitar, bass and percussion, there’s no shortage of interesting things happening, though they remain focused and steady throughout, and in singer (songwriter and guitarist) Tom Lee-Richards, they’ve a frontman who brings to mind both Antony Hegarty and a Buckley or two.

The combination of brass, strings and voice provides a fascinating core to Catch Release, though they’re very much song based. These songs, recorded live, though with remarkable clarity, paint plenty of enthralling pictures. They start with “Motion Sickness”, which almost arrives in parts, though the interplay between Lee-Richards’ voice and Tim Hannah’s French horn is a constant. It’s a perfect start, and better still is “Out Of Sight”, where Navin Gulavita’s violin becomes central, and the group as a whole display a remarkable lightness of touch; with drummer Bill Bates building a rhythm that’s simultaneously playful and dark. I think my favourite is “Christmas In The Jungle”. It’s almost filmic, the combination of lyrical flights, involving lions and the forest floor, sweeping atmospherics and splashing percussion is intensely satisfying.
www.catchreleaseband.com
www.facebook.com/CatchReleaseband
www.catchrelease.bandcamp.com/asleep-is-a-friend-of-mine
Phil S.