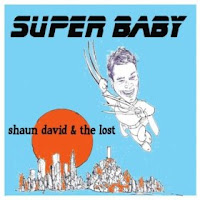 The internet might have been invented for artists like Shaun David Milella. Born and raised in Milwaukee and now living in San Francisco, he’s been writing songs for as long has he can remember, playing in bands (one of them, One Good Round, released an album in 2007) and gigging when he can. Yet, like thousands of others, he’s operating within a business that’s rapidly disintegrating before our eyes. Record companies no longer take chances, and little things like ‘artist development’ barely register. Which is where the internet comes in. Here I am sitting in Leicester, playing a record (on my computer), and it’s all down to the power and reach of the world wide web – and boy, do we music fans take it for granted.

Certainly, not everything we hear will rock our boat, but when we find something that connects, it feels like a lottery win. So it is with “Super Baby”, a six-track EP of folk pop songs, which sound like long lost friends. Milella writes lyrics that are almost conversational; like improvised narratives that can lead anywhere. Of course, that’s unlikely to be the case, but it’s an affectation that’s quite captivating. Produced with a seven-piece band, and an instrumental line-up that includes guitar, bass, drums / percussion, keys, saxophone and trombone, there’s no shortage of interesting things happening. Opening track “Please Come Get Your Things” arrives on a shuffling island rhythm, with a twisting saxophone adding to the effect. Milella’s words fill in the spaces with the detail. His voice is sometimes a little similar to Jonathan Richman’s, which is perfect on “Diamonds”, and on the organ / sax flecked title track, he harnesses a soulful sheen, which isn’t unlike listening to Flight of the Conchords, though applied with more serious intent.
www.facebook.com/shaundavidmusic
www.shaundavidmusic.tumblr.com
www.shaundavid.bandcamp.com/super-baby
Simon M.