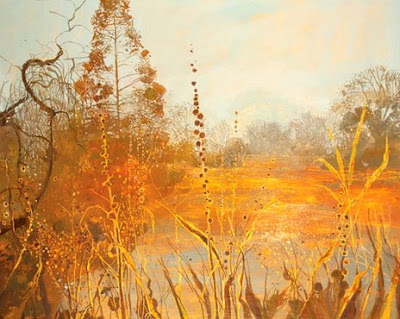 Her work The Isabella Plantation won the 2013 Lynn Painter-Stainers prize, which rewards figurative and representational painting.

Egg Tempera, which uses egg yolk to bind pigments, dates back to Egyptian times but became largely obsolete after oil paints appeared in the Renaissance.

Stage, a graduate of the Royal Academy, also receives a gold medal.

The artist, who was born in Hartlepool, was given her prize at the Mall Galleries in London.

Her unusual choice of paint, which has to be hand-mixed, is applied to gesso boards, giving her work a distinctive texture; and she is known for her strong sense of pattern and depictions of water.

The generous prize cheque eclipses the normal asking price for her paintings, which are usually listed for between £1,000 and £5,000.

More than 1,000 paintings were submitted for the awards, and an exhibition of selected works will be held in the Mall Galleries from 19 February - 2 March.