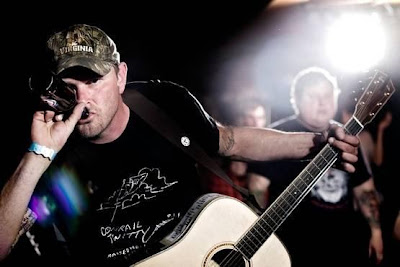 Following the release of his fifth album '40 Miler', ex-Avail singer Tim Barry is set to brings his earnest, poignant, and riotous songs back to the UK for an extensive June tour.

Richmond, Virginia-based singer-songwriter Tim Barry last joined our very own Frank Turner on tour last Autumn in the UK and Europe, sharing his blues, folk, and country-tinged sound with an appreciative audience. This time, dates will be more intimate for what will be an incredible evening of powerful storytelling and heartfelt sing-a-longs.
Full tour dates are:

* Tickets are on sale now from the usual outlets and the venues themselves.

Tim Barry has long left behind his harder edged music, but not the soul or passion which fueled it. One of his songs, 'Prosser's Gabriel', led to a freedom fighting slave's final resting place from the 1800s being turned from a car park into a park memorial to honour his name. If that's not powerful songwriting, then music means nothing to anyone.

He's also released a video which has been inspired by a loved one who passed away in 2008. 'Shed Song' from his last album, and its video, will prepare you for what to expect when he arrives in the UK. The video can be seen here: http://youtu.be/SBPMTw0CoRM