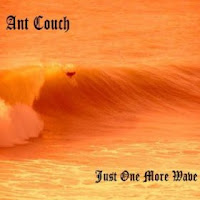 New Zealand born singer-songwriter Anthony Couch relocated to Melbourne, Australia in 2006, specifically to further his musical aspirations. Since the move, he’s become an active and enthusiastic participant in the local scene, gigging regularly, and writing and releasing a steady stream of new music. “Just One More Wave” is his latest, and his debut long-playing record.

Get past the cover, the simple tinted image and the strangely inappropriate gothic German font, and you’ll discover a singer-songwriter with a deft touch and an easy-on-the-ear demeanor. It’s an album of acoustic, folk-pop songs with plenty of lyrical twists and turns, and hooks that burrow deep in the subconscious. I imagine they make ideal listening for carefree sunny days and balmy evenings, and for those of us ‘enjoying’ a Northern Hemisphere winter, they bring a little imported glow.

“Passing Time”, the album’s opening track, delivers everything that’s expected. A warm, rhythmic strum is enhanced with a delicate lead guitar and Couch’s affable tone. “My Own Eyes” is beautifully pensive, with a harmonica lead that perfectly compliments both the fragility of the vocal and the general mood of the song. The upbeat “Downstairs” applies a pleasing old-time, recorded-in-a-cupboard effect and the super-radio-friendly “The Same Old Song” would be the lead single, if we still cared about such things.
www.antcouch.com
www.facebook.com/Ant-Couch
Phil S.