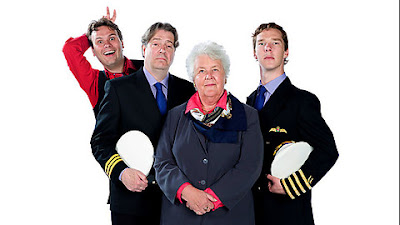 Pulp frontman Jarvis Cocker has been nominated for radio broadcaster of the year in this year's annual Broadcasting Press Guild Awards.

Cocker, who presents shows on BBC Radio 4 and 6 Music, is up against Radio 4 news presenter Martha Kearney and former newsreader Charlotte Green.

Green, famous for her occasional giggles, was nominated in recognition of her 25-year career at Radio 4.

The awards are voted for by a panel of media journalists.

Previous recipients of the broadcaster of the year award include Sir Terry Wogan, Jonathan Ross and Kirsty Young.

Cocker became a figurehead of the Britpop movement of the mid-1990s through his band, whose hits included Common People and Disco 2000. He began presenting his Sunday Service show on 6 Music in January 2010.

He won the rising star prize at the Sony Radio Academy Awards later that year.

His Radio 4 show, Wireless Nights, sees him take listeners "on a nocturnal journey around stories of night people".

Others in the running for an guild award in March include BBC Radio 3's World and Music, a sequence of classical music interspersed with both popular and less familiar poems and prose read by leading actors.

The judges described it as an "overlooked jewel" in the BBC's crown.

They will compete against Soul Music, another Radio 4 series, about music that has a strong emotional impact.

The winners will be announced at an awards lunch in London on 14 March.