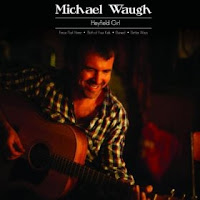 Things are looking good for Melbourne-based singer-songwriter Michael Waugh. His new five-track EP “Heyfield Girl” is steadily gathering acclaim, and the title track, when released in demo form to festival organizers and songwriting competitions, resulted in invitations to perform and a clutch of nominations and prizes.

It’s an outstanding track, rooted firmly in the folk tradition, it tells the story of Waugh’s mother, her battle with illness and his father’s love for her. It might have been maudlin or a trifle over-sentimental, but thanks to a light-touch and a supple arrangement, it’s uplifting and life-affirming.

Stories are central to Waugh’s style, probably the result of a misspent youth listening to classic country music, and there’s a gentle country influence at play throughout the recording. The remarkable “Both of Your Kids” is chock full of detail, the tiny pieces of information that lift a song beyond the ordinary, and “Burned”, a brushfire narrative that seems so relevant to Australian life.

Local commentators are already comparing Waugh to Paul Kelly, and it’ll be interesting to see whether he can make the same international impact. There’s a debut album release planned for mid-2013, so we may not have to wait too long to find out.
www.michaelwaugh.com.au
www.facebook.com/Michael-Waugh
Phil S.