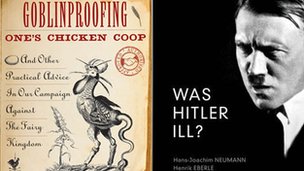 Goblinproofing One's Chicken Coop and How Tea Cosies Changed the World are among the books vying for the Oddest Book Title award.

Other titles up this year include Was Hitler Ill? and How to Sharpen Pencils.

The Bookseller diarist Horace Bent is at the helm and said he is glad "to represent a prize that draws attention to authors not called Hilary Mantel".

Mantel is the first woman to have won the prestigious Man Booker Prize twice.

The Diagram Prize is now in its 35th year of championing books with quirky names.

This year Lofts of North America: Pigeon Lofts by Jerry Gagne has been featured, as has In God's Doodle: The Life and Times of the Penis by Tom Hickman, which explores man's relationship with his "most precious ornament".

Philip Stone, the Diagram Prize co-ordinator, said he hoped to see the shortlisted books in shops around the UK alongside best-sellers like E L James' Fifty Shades trilogy.

"Upon my next trip to my local independent bookshop, I hope to see it alongside all the pornographic literature that appears to be keeping the entire book industry in rude health," he said.

He added: "People might think this prize is just a bit of fun, but I think it draws welcome attention to an undervalued art."

Previous winners include Greek Rural Postmen and Their Cancellation Numbers, How to Avoid Huge Ships and Living with Crazy Buttocks.

The winner, who receives a bottle of claret will be announced on 22 March.

FULL SHORTLIST
Was Hitler Ill? by Hans-Joachim Neumann and Henrik Eberle
Lofts of North America: Pigeon Lofts by Jerry Gagne
God's Doodle: The Life and Times of the Penis by Tom Hickman
Goblinproofing One's Chicken Coop by Reginald Bakeley
How Tea Cosies Changed the World by Loani Prior
How to Sharpen Pencils by David Rees