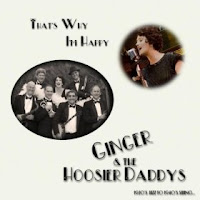 Ginger Pauley is a tremendously talented all-round entertainer with a resume that reads like a particularly wide-ranging entertainment magazine. Her film work includes “Water for Elephants” and the upcoming Disney movie "Saving Mr. Banks", on TV she’s a regular on the Conan O’Brien show, has had parts in “Heroes” and “The Gilmore Girls” and her theatre credits include classic musicals like “Guys and Dolls”, “Calamity Jane” and “Gigi”. Simultaneously she maintains a career in music, singing with various ensembles including The Crazy Rhythm Hot Society Orchestra, The Mike Henebry Orchestra, and most regularly, The Hoosier Daddys. The latter take their name from the variety of musicians who are involved in the project, so many that club owners often have to ask “Who's yer Daddys tonight?”

“That’s Why I’m Happy” is the group’s debut six-track EP, a thoroughly charming collection of dance floor friendly, vintage jazz and swing songs. They begin with the title track, the classic Helen Kane song, which is wholly appropriate, considering that Kane was the primary inspiration for Max Fleischer’s “Betty Boop” character, a role that Pauley played at the Universal Studios. It’s followed by a fun, sprightly version of “Hitchy Koo” (from “Oh, What A Lovely War”), but the slower material, the standards “You Made Me Love You” and “You Were Meant for Me”, are just as engaging, as Pauley and her Daddys breathe new life into songs that are nigh on engrained in the Western popular cultural psyche.
www.facebook.com/Ginger-The-Hoosier-Daddys
www.gingerpauley.com
Tony S.