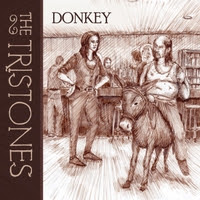 Toronto quartet The Tristones (Tristan Clark on guitar and vocals, Ryan Farley on bass, Dylan Hemming plays keyboards and Trevor Falls drums) formed in 2009 and quickly established themselves as a force to be reckoned with on their local scene. Steeped in both the tougher side of ‘60s psychedelia – Hendrix and Blue Cheer come to mind – together with the straight up / head down ‘70s rock tradition, it’s no surprise they’ve caused a few musical ripples, especially as they thoughtfully included some big sing-a-long anthemic choruses, and insidious pop hooks.

Their music represents a back-to-basics approach to the rock format, and therefore sounds almost timeless. Frontman Clark possesses a soulful, rough-edged voice, ideally suited to his songs, and isn’t shy about letting rip on guitar. The three remaining members all supply sterling support, and all get the opportunity to shine on various tracks. On “Neighbour”, drummer Falls sounds like his floor toms have offended him in some way and he’s teaching them a lessen they’ll never forget. Indeed, the rhythm section is particularly lively throughout the dozen tracks, and with Hemmings unfussy keys providing depth and nuance, the sound is always full and rounded.

As for the songs, well the fore-mentioned “Neighbour” is definitely a keeper (love those backing vocals, by the way); “Levee” is an absolute monster rock track, propelled by a stunning riff and a terrific all-round performance. “I Knew You” represents their more pop side, though they don’t sacrifice an iota of their energy, and they conclude proceedings with the dark and foreboding “Elder Blues”, which should get Free fans reaching for the download button.
www.facebook.com/TheTristones
www.thetristones.bandcamp.com
Phil S.