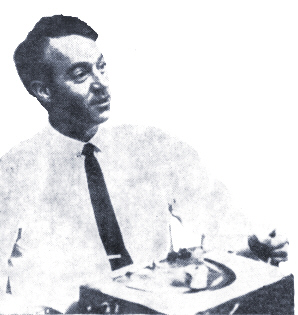 Paul Tanner, a trombonist with the Glenn Miller Orchestra who later played the space-age hook on the Beach Boys' Good Vibrations, has died at 95.

The musician's stepson, Douglas Darnell, told the Associated Press he had died of pneumonia on Tuesday.

The last-surviving member of the Miller ensemble, he also taught jazz at UCLA and recorded with several Hollywood orchestras over a long career.

But he remained best known for his work with the Californian rock band.

Although many assumed the eerie whistling tones on Good Vibrations were produced by a theremin - the electronic musical instrument played by waving your hands around two antennae - Tanner was actually using an instrument of his own design called the electro-theremin.

Easier to use than its Russian counterpart, Tanner's instrument was played by moving a slider up and down a diagram representing a traditional piano keyboard - similar to the later Stylophone.

Tanner, who had his design built by inventor Bob Whitsell, also played the instrument on other Beach Boys songs including Wild Honey and I Just Wasn't Made For These Times.

Of the recording sessions, he said: "They were usually very late at night, and very long, and very good pay".

Born in Skunk Hollow, Kentucky, in 1917, he was an accomplished musician who studied piano before taking up trombone at the age of 13.

As well as his work with the Glen Miller Orchestra, with whom he toured from 1938 - 1942, he was a symphony player for conductors such as Andre Previn and Leopold Stokowski.

His music classes in California's UCLA were unsurprisingly popular. The Los Angeles Times reported in 1979 that he had taught 65,000 students in 15 years, and maintained a "continuous waiting list".

He recorded a solo album, Music for Heavenly Bodies, with his electro-theremin, and provided sound effects to several interstellar TV series, including Lost In Space and My Favorite Martian.

But he considered the instrument a "toy" and sold it to a hospital to use in hearing tests by the late 1960s.