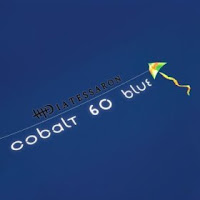 Calgary quintet Diatessaron are throwback to the classic early / mid ‘70s progressive era, though they sound remarkably contemporary. Perhaps it’s their uninhabited musical ambition that marks them out, or maybe they’ve hit upon a sound that’s simply timeless. Whatever the reason, they’d sound perfectly at home sharing a bill with current UK prog rock poster-boys Syd Arthur, and on this showing, it’d be toss-up which of them went on last.

“Cobalt 60 Blue” is the third EP they’ve released since 2010, and although the album seems the natural format for this sort of music, these short, four or five song bursts make sense when we take into account how today’s music fan buys and listens to music. The four songs presented here provide a snapshot of a group in development, and as a suite, it holds together rather well.

They begin with “Kitestrings”, a title track of sorts, and it’s a stunning group composition. What especially impresses is their ability to embrace genuine pop hooks within an arrangement that often challenges and confronts. “Castaway” is perhaps easier, and contains several pieces of quiet, intense beauty – the opening moments in particular. “The Hourglass” exposes their harder edges, though the song remains central, and they finish with perhaps the most daring track of the collection, the exceptional “A Magnet's Love Song”. It’s nigh on impossible to pin down its compositional structure, but it’s sexy and progressive; two words rarely seen in the same sentence.
www.facebook.com/diatessaronband
www.diatessaron.bandcamp.com/cobalt-60-blue
Phil S.