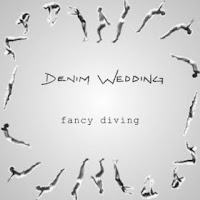 Denim Wedding is Jennifer Faust and Brian Kunkel, a Portland, Oregon based duo who came together in 2009, originally to perform Faust’s solo material. The project quickly evolved into something on a more equal footing and was subsequently christened Denim Wedding. “Fancy Diving” is their debut release, a five-track collection of achingly beautiful indie-folk and alt. Americana. Artists like Mazzy Star and Tarnation provide appropriate reference points; nothing too obvious, but had I been told they were signed to 4ad in the mid-’90s, I don’t think I would have been too surprised.

Of course, they weren’t. Denim Wedding is a contemporary pairing, though they do apply certain timeless qualities to their music. They aren’t short of tunes, either. Opening cut “To the Moon” shows all the melodic confidence of a classic Jayhawks track, as does the equally fine “Ankles Off”. Kunkel takes a substantial share of the lead on the former, but it’s where the two voices combine that they truly soar. The effect is ethereal and quite poignant.

On the concluding “Sweet Honesty”, Faust takes centre-stage and her voice is entwined with what sounds like a melancholy steel guitar and sorrowful pipes. It’s moving and emotionally wrought, and leaves the listener desperate to press play, and start all over again.
www.denimwedding.com
www.facebook.com/Denim-Wedding
Phil S.