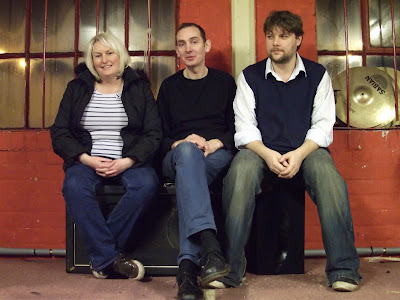 Following their fun-fueled new album Heart and Soul in the Milky Way, Newcastle's indie punk stalwarts Milky Wimpshake will be playing some gigs over the coming months, including two indiepop weekenders – this weekend's London Popfest and the Now We Are Festival in the West Midlands over the May Bank Holiday.

Milky Wimpshake also reveal their new video for one of the album's highlights "Without You", a lovely duet between Pete Dale and Sophie Evans. Here's what Pete says about the video: "No expense is spared in Milky Wimpshake's extravagant bid to create the more high-budget, tech-savvy video performances this side of Kanye West. How do they do it? And, more importantly, why on earth do they bother? One redeeming feature of this, though, is the excellent Sophie Evans - how she manages to mime so well when her vocal partner is so clearly inept is one of those deep mysteries, comparable to though not synonymous with trying to get the aluminium strip off a cartoon of Soya Milk without spilling any. Know what I mean?"

Nearly 20 years since releasing their first cassette album, Milky Wimpshake unveil their fifth 'proper' album Heart And Soul In The Milky Way, out now on Fortuna POP! Recorded in a single day, it consists of 15 more songs from the pop/punk chocolate assortment box which the band have raided for so many years: love songs, silly songs, songs about obsolete items of stationary and such like, all set to a basic guitar buzz and kick drum combo.

Video for "Without You”
http://www.youtube.com/watch?v=OwAl1vm_-2o