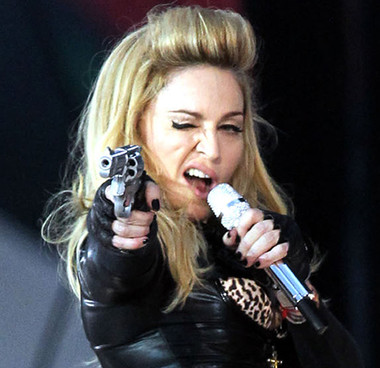 Madonna has beaten Bruce Springsteen and Pink Floyd founder Roger Waters to be named the highest-paid musician in 2012 by trade publication Billboard.

The 54-year-old singer has topped the annual rundown of the top money-makers for the second time in five years.

Concerts account for 68.9% of the total revenues for the 40 artists on the list, which estimates annual earnings.

He earned $33.4m (£25.3m) after touring to sold-out stadiums and arenas on the back of his number one album Wrecking Ball.

Strong merchandise sales helped with his earnings, with Springsteen's live shows making up 92% of his overall revenue.

Van Halen were in fourth position with $20m (£15.3m) after touring in support of their album A Different Kind of Truth.

He said: "Ironically, the most popular touring artists are usually well past their peaks on the album sales charts."

"The entire top 10 averaged 84.2% of their income from concerts, and the number would have been higher, if not for Justin Bieber's mere 60.1% share at number 10 dragging down the average," said Peoples.

Madonna is the only woman in the top 10 after last year's victor Taylor Swift fell to 15th place because she did not tour last year.

She did not tour last year but took the year out to have a baby while her second album 21 continued to sell well in physical and digital formats.