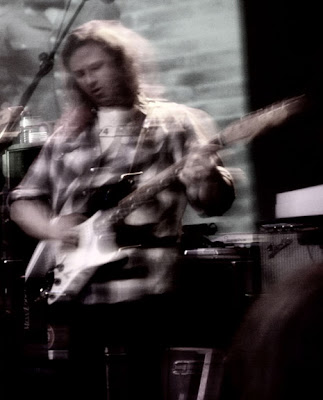 Camper Van Beethoven's co-founder and multi-instrumentalist Jonathan Segel will be releasing his latest full-length solo effort, All Attractions, on March 6th in both Digital and CD formats.

Most of the songs were written in the Swedish countryside where he and his (Swedish) wife have been staying with her family every summer. Although one would expect a pastoral tone, the music ends up as some rocking electric guitar-based tunes, evoking the big '70s rock bands of the past, along with some more contemporary features thrown in.

The record was started by Jonathan working with fellow Camper Van Beethoven bandmate Victor Krummenacher on bass and guitar, and their SF Bay Area cohorts former King Missile/Moth Wranglers' Chris Xefos playing some bass and doing the recording and mixing, and John Hanes on drums. As the project progressed, he got some backing vocal help from the Counting Crows' David Immergluck, Baby Flamehead's Eden Daniels and Espers' Helena Espvall (who also contributed some cello). Built To Spill's Brett Netson also delivers a show-stealing guitar lead on the track "I Know You Know Me (Hey You)."

At the end of the recording process, Jonathan used Kickstarter to fund the mixing, mastering and manufacturing of the CDs.

As part of this project Jonathan will not only be releasing the full-length All Attractions studio album, but also a seven-track bonus instrumental EP entitled Apricot Jam, an organic collection of improvised jamming between him (guitar), John Hanes (drums), fellow CVB alum Victor Krummenacher (bass) and Graham Connah (Hammond organ). The title is an obvious nod to George Harrison's third LP in the All Things Must Pass set.