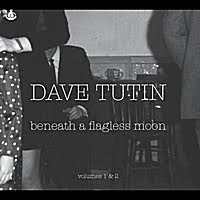 Dave Tutin - Beneath A Flagless Moon Vols. 1 & 2 (openDmusic)
Dave Tutin was born in Nottingham, legendary home of Robin Hood, and the birthplace of D.H. Lawrence, though he’s now resident in Santa Fe, New Mexico, the oldest city in the American west - if my memories of “Flashman and the Redskins” haven’t completely deserted me. Tutin’s an old school singer-songwriter, very much in the American roots tradition; if names like John Prine, Steve Forbert and Jim Ford come to mind, then you’re not far off the mark. That’s not to say he’s acquired a fresh new American accent, but he’s lost much of his Midlands’ lilt – his accent’s almost neutral.

His new record is an ambitious 18-track collection. The production has purposely been left sparse, though the sound is crisp and forthright. The lack of distractions leads us directly to Tutin’s songs and voice. Both bear up to scrutiny. He’s a storyteller at heart, but never forgets the importance of a tune. He understands hooks and their importance in building familiarity, and he frames the personal in a way that sounds universal. His voice is melodic and rich, and the best tool for the job. Favourites, at the moment, include “City of Ghosts”, with its almost Leonard Cohen-esque density, his love song to his new home on “Santa Fe” and the beguiling “Waiting for My Heart”. There’s a lot here to take in, but there are worse ways to waste an hour or so.
http://davetutin.com/
Rob F.